window.dataLayer = window.dataLayer || []; function gtag(){dataLayer.push(arguments);} gtag('js', new Date()); gtag('config', 'G-G54KGC74HV'); Skip to content
Home/News/“Am I a joke to you?” A serious discussion about the not-so-serious Dogecoin cryptocoin

“Am I a joke to you?” A serious discussion about the not-so-serious Dogecoin cryptocoin

Have you already heard about the dog-inspired cryptocoin, launched back in 2013 as a joke by a group of friends in the USA? As a form of meme (e.g, recurring internet jokes), the DOGECOIN in the shape of a Shiba Inu dog was meant to be a humoristic response to the more popular and soon-to-explode Bitcoin. Today, the DOGECOIN (under the DOGE symbol) trades on several popular cryptocoin exchanges, i.e., Kraken (https://bit.ly/2PaiMbM), Binance (https://bit.ly/3uhyjWb) and BitPanda (https://bit.ly/3fnW9uZ), just to mention a few, and has a market cap of ~7 Billion dollars (as of 29.03.2021). Take that for a joke.

In the reminder, we’ll try to see what is behind this multi-billion joke that has attracted interests from all over the world, catalyzing the attention not only of the general audience, but as well a few cryptocoin whales, the most famous one currently being Elon Musk.

DOGE is a virtual coin with the original goal to facilitate payments between end-users, a goal shared with many other options. Its internal protocol design was inspired by the now-defunct LuckyCoin, as well as LiteCoin (https://litecoin.org/).

It is a proof-of-work ledger: nodes must solve a mathematically challenging problem to be able to add a block to the ledger (see Gervais, A., Karame, G. O., Wüst, K., Glykantzis, V., Ritzdorf, H., & Capkun, S. (2016, October). On the security and performance of proof of work blockchains. In Proceedings of the 2016 ACM SIGSAC conference on computer and communications security (pp. 3-16)). The original design relies on scrypt, a cryptographic primitive that, in essence, forces DOGE miners to rely on highly dedicated and costly hardware (such as ASICs, specialized FPGAs). However, if you do own one, you can join an intriguing community of DOGE miners, via so-called ‘mining pools’, a group of interested people joining (computing) efforts to solve together a problem. Several pools exist for DOGE, including AikaPool (https://aikapool.com/). The design of the DOGE allows for faster transactions (new blocks can be added to the ledger every 1 minute, compare that with 2/3 minutes of LITECOIN or 10 minutes for BITCOIN). Interestingly, there have been cases of computers in university labs used to mine DOGE (see Alex Hern, Student uses university computers to mine Dogecoin, The Guaridan, 4 March 2014 (https://bit.ly/3fj2WWS)) although at the current conversion rate, his gains would be minor. Disclaimer: we are not allowed to use UniNE machines to mine cryptocoins of any kind for your self-interest.

While mining is one possibility to generate new DOGE coins, the community has also introduced waterbowls, websites that distribute DOGE coins (or portions of it) for free to whoever demands. You can get your free DOGE coins from DogWaterbowl (https://dogewaterbowl.vercel.app/)!

The DOGECOIN ledger can be explored on the following website (https://dogechain.info/), where one can see also the current USD/DOGE conversion rate, the most successful miners, as well as the current difficulty, at 3,715,350.6 at the time of the writing (this number is very dynamic). What is that? The difficulty of a coin indicates how many hashes (i.e., unique identifiers) must be computed by your computer or ASIC to solve the mentioned puzzle, win the competition against the other miners, and add your block to the ledger. 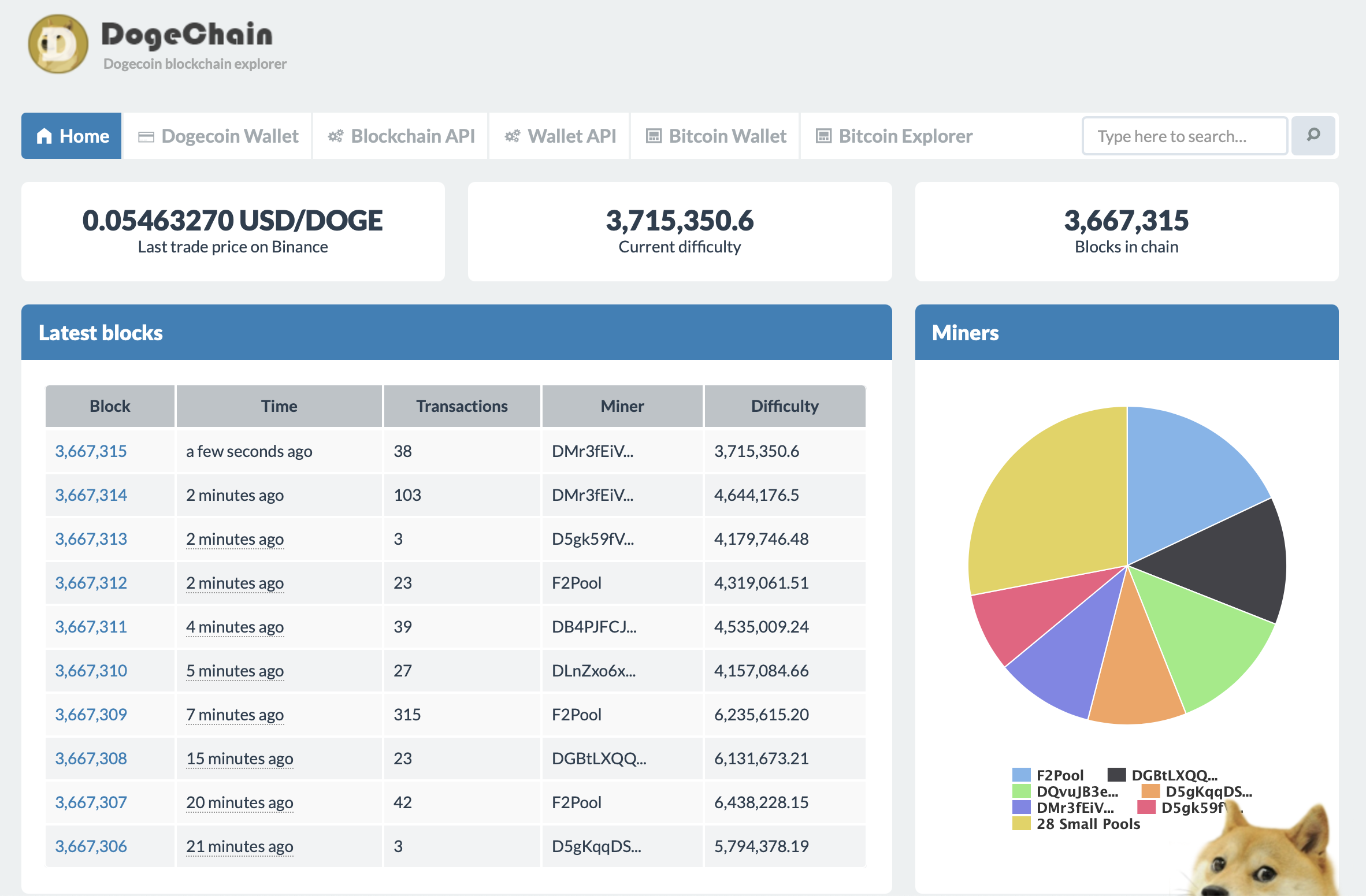 While one might believe intuitively that the difficulty can only grow, is showcases instead a rather strange trend (as seen in the figure below, from Dec 2013 until nowadays). Why is that? The trends follow the mining power available on the network, basically to prevent blocks to be mined too quickly with the adjustment of the difficulty value. This process is called ‘difficulty re-target’. 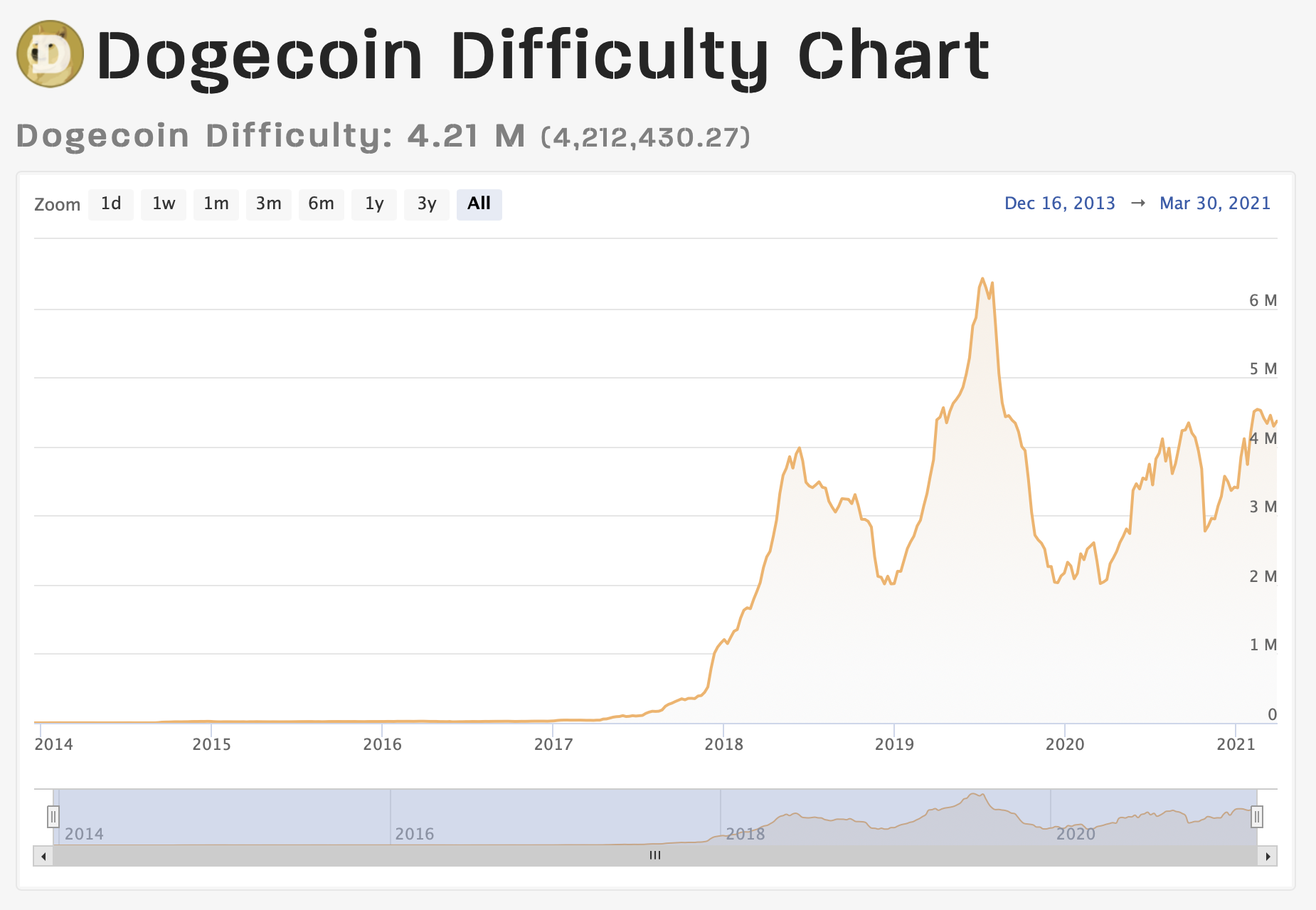 Recently, strange movements are happening over the DOGECOIN chain, with one single wallet now absorbing more than quarter of the total supply. See for yourself at Dogecoin / Rich list.

Dr. Valerio Schiavoni received his M.Sc. and Ph.D. degrees in Computer Science from Roma Tre University (Italy) and from the University of Neuchâtel (Switzerland), respectively. He coordinated the Centre of Competence for Complex Systems and Big Data at UniNE and currently coordinates CUSO (Conférence Universitaire Suisse Occidentale) for the Computer Science programs. Since 2018, he has been a Lecturer (Maître-Assistant) within the Computer Science Department (IIUN) at UniNE. He co-founded SafeCloud Technologies Sarl, a Swiss start-up. He co-founded AHUG, a Swiss not-for-profit group for practitioners using the ARM technology for high-performance computing. His interests span several domains, including system security, large-scale and distributed systems, deep learning and system support for efficient data science.